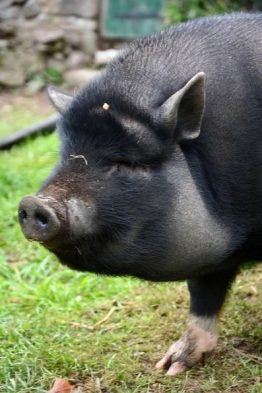 Phoebe is a young Vietnamese pot-bellied pig and she was bred to be eaten. Happily, we were able to rescue her from a premature death and she is now, as you can see, enjoying her new life in her safe forever home at the sanctuary. She was saved along with her two sisters who were subsequently rehomed and later both her mother and her father were also rescued by Miranda and Jerome. Pigs are very intelligent and also very affectionate creatures when treated kindly. Phoebe loves cuddles and head kisses!

Phoebe came from a pen that was two foot thick in mud and faeces; a stagnant pool.  She couldn’t reach anywhere dry. We rescued Phoebe along with her two siblings who were fostered forward, but we kept Phoebe.

She is now the matriarch of the garden. Every herd needs someone in control, but it does mean that she doesn’t accept new visitors. So we say to everyone that arrives, give Phoebe a three metre radius. Even if she appears to be happy and content, or asleep don’t go within three metres of her. If people think they know better, Phoebe will become an attack missile! She does not like her bed cleaned out if she is on it, she won’t be told what to do by a human she does not consider to be her family and woe betide anyone who think they know best.

Phoebe used to live in the home with us, until she became so big that there was no sofa left. She will sit for her dinner and her biscuits. She is very loving to the immediate family and she will take to visitors who respect her, but anyone who gets in her space she will tell them quickly. Her mum and dad are Belle and Sebastian, as we went back to get them from the same place. They were all introduced but Phoebe decided she did not want to go to live with them. She decided to stay with her friends in the garden, she prefers her comforts rather than living as a natural pig with the Friendly Family.

Please consider making a donation to help with the continued care of Phoebe, or contact us for more information about sponsorship and friendship packs.